A hamster’s cheeks are arguably its cutest characteristic. The hamster is an animal that particularly excels at activating our inborn protective instincts.

People are drawn to cute things as they remind us of human babies, and a hamster’s tiny size, downy fur, and chubby cheeks all generate an overwhelming ‘aww’ response.

But why do hamsters’ cheeks puff out as they do? Are they just designed to be adorable, or do they have a purpose? Do hamsters store food in their cheeks?

Do Hamsters Store Food in Their Cheeks?

Hamsters have expandable cheek pouches that evolved to store food and carry bedding. These large pockets are an extension of the mucous membranes that line the inside of the mouth and are described as skin-like.

Hamsters are not unique in being able to store food inside their cheek pouches. Squirrels, platypuses, chipmunks, most primates, and koalas share this ability.

The primary role of cheek pouches is to facilitate the rapid collection of foodstuff, as well as provide temporary storage and transport. Wild hamsters are classified as prey animals, meaning they are exceedingly vulnerable to a slew of predators.

Being able to quickly gather as much food as possible, then safely transport it to their burrows, is an essential part of how the species has endured constant peril.

Cheek pouches also enable the females of some hamster species to hide and transport their babies in instances of danger. Other types of hamster are known to fill their cheek pouches with air, which helps them to stay afloat in the water.

How Much Food Can Hamsters Store in Their Cheeks?

Hamsters can stuff their cheeks with up to 20% of their body weight. In comparative terms, that equals a person carrying around 30 extra pounds of food.

In the wild, hamsters typically have to eat every two hours. They collect their food in the evening when there is the least chance of them being spotted by one of their natural foes. The aim is to collect as much food as possible and get it back to their burrow without giving away their position.

The mouth of the hamster evolved not to release any saliva into their cheek pouches, which ensures that the food stays fresh and dry during transport.

The ability to keep the pouches dry is indispensable to their survival, as they also employ their cheeks to bring the raw material of their nests back to their burrows. Hamsters are also capable of running with their cheeks full, another protective evolutionary mechanism.

Do Hamsters Have Pouches in Their Cheeks?

The cheek pouches of the hamster are bilateral invaginations of the mucous membrane inside the lining of the mouth. The pouches are highly distensible, which enables the hamster to hoard and transport the equivalent of up to 20% of their total body weight within. They are able to stretch right back to the hamster’s shoulders. They do not contain glands, meaning no saliva is secreted into the pouches despite them being inside the mouth. This evolutionary by-product evolved to ensure the hamster’s ability to keep its food supplies and the raw material of its nest dry.

Can Hamsters Get Food Stuck in Their Pouches?

While both practical and adorable, hamsters’ cheek pouches can occasionally cause problems. One of these is impacted cheeks, caused by food, bedding, or some other foreign material becoming stuck. 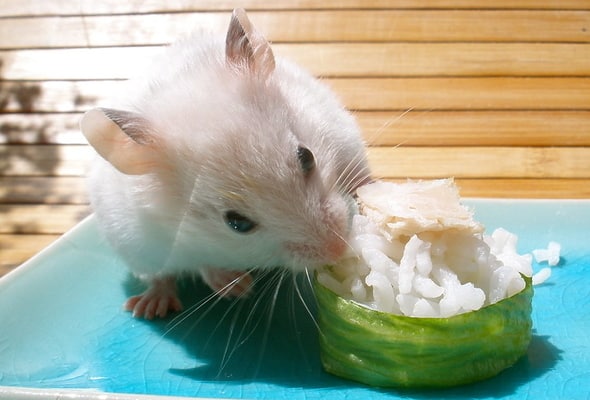 There are methods for treating an impaction in a pet hamster. You can massage the blocked cheek, loosening the food and enabling your hamster to use its front paws to push the food out, as they would normally do.

If that doesn’t work, you may need to extract the blockage yourself, using a small implement that doesn’t have sharp edges and exercising extreme caution. Alternately, you can try using a small eyedropper to flush the cheek pouch with a mild saltwater saline solution to help break up the stuck food.

It is imperative to treat a case of stuck food as soon as possible. Unchecked impactions can lead to an abscess. An abscess is a serious condition for hamsters. It is worth noting that they can also be caused by a scratch in the lining of the cheek pouch which subsequently becomes infected.

It is essential to determine whether your hamster is suffering from an impacted cheek pouch or whether it has already progressed to an abscess. If you have made attempts to unblock your hamster’s cheek pouch and it still appears swollen, then an abscess may be reasonably suspected.

An abscess will also make your hamster feel and possibly look unwell, whereas an impacted cheek will not necessarily. An unchecked infection can spread to the rest of a hamster’s tiny body very quickly, so it is vitally important an affected hamster receive prompt veterinary attention.

How Do I Get My Hamster to Empty Its Cheek Pouches?

It is recommended that you never empty your hamster’s cheek pouches yourself unless it is necessary as in the case of impaction. The vast majority of the time, a hamster will empty its cheeks of its own accord.

As previously mentioned, a gentle cheek massage is often all that is needed to loosen up any stuck food and facilitate the emptying of the cheek pouches. You can also try flushing out the items using a small eyedropper filled with lukewarm water or, as previously outlined, a mild saline solution.

In summary, hamster’s evolved the ability to store food in their large, pliable cheek pockets. The pockets have retractor muscles that engage to help the hamster fit as much food inside as possible.

This was essential to their survival in the wild, as they were able to limit how often they left their burrows and encountered the many daily threats they faced as prey animals.

It is important for owners of pet hamsters to remain vigilant, as there are rare occasions when food may become lodged inside a cheek pocket, and lead to a potentially life-threatening abscess.