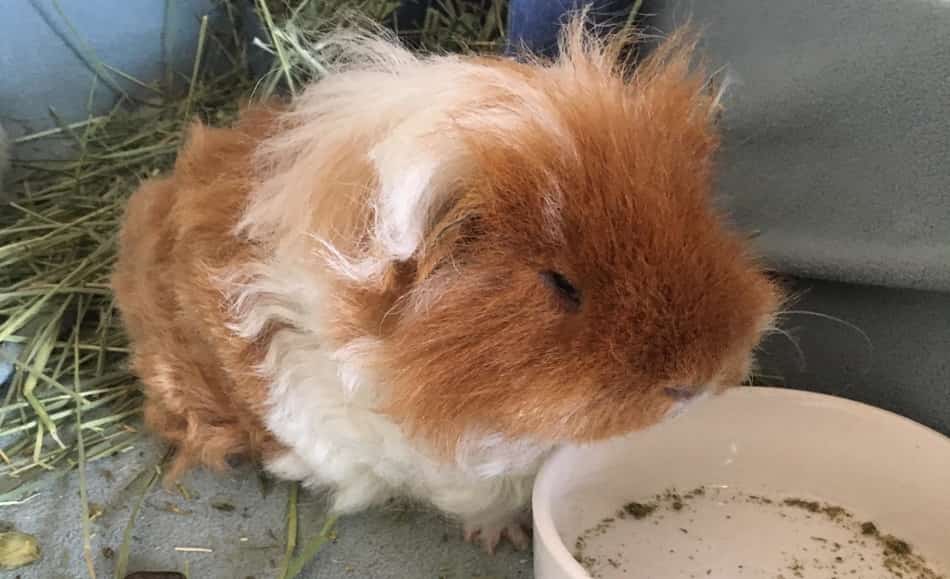 Guinea pigs are funny, interesting little creatures, and everyone who shares their home with one (or four!) knows how much fun it is to play with them. They are quite vocal and quick to let us know how they feel, but sometimes it can be difficult to translate what they are saying, especially when they use body language like puffing up their fur.

So, why do my guinea pigs puff up when they eat? Your guinea pigs may be puffing up in territorial displays, which is normal behavior for the most part, or because they are cold or ill. Further, they might be acting on an instinct they may not even realize they have.

This article will discuss territorial behavior in guinea pigs, how guinea pigs deal with cold, possible illnesses that could be driving the puffing behavior, and the possibility of their prey animal instincts being behind it all. This Is My Territory!

The guinea pigs we enjoy in our homes no longer exist in the wild (believe it or not, they were wild once!) but they still have wild cousins. These cousins, and the great-great-grandparents from which they all descend, are quite social and exist in family units or herds.

They depend upon each other for many things, including help creating or claiming burrows, gathering food, and grooming. However, they can be quite territorial as well and often display territorial, or dominance, behaviors to work themselves up the guinea pig social ladder, so to speak. Our housebound companions have the same instincts.

If you have more than one guinea pig, chances are you have seen plenty of this kind of behavior already, unless you were lucky enough to bring home littermates or cage mates who were already bonded when you acquired them.

Usually, most dominance behaviors are conducted in the early days of guinea pig introductions and bonding; however, these behaviors do come up from time to time with the closest of guinea pig pals, which is normal and healthy.

Just like many of us humans in our jobs, guinea pigs feel the need for a little upward mobility every now and then. This means dominance behaviors can pop up anytime—when acclimating to new cage mates, when new members of the opposite sex appear in the environment, when reaching sexual maturity, when in heat, or when they feel they are competing for food.

One of the many behaviors guinea pigs will display out of territoriality or dominance is puffing up their coats, so if your piggies are puffing up during mealtimes, it could be that they are trying to show each other up!

Fortunately, this does not necessarily mean anything negative, so there is no reason to fear. Here are a few other signs your pals may displaying to re-shuffle their hierarchy:

This list is not all-inclusive, and it is important to remember that many of these behaviors do not mean your guinea pigs are aggressive or do not get along. Often, these displays are even simple “getting to know you” behaviors.

If you notice these signs, just keep an eye on your pals to make sure things do not escalate into nipping/biting, lunging, or kicking out, as these are warning signs a more serious fight may be about to take place.

As mentioned earlier, these behaviors can crop up anytime, but one of the most common is when too many guinea pigs share too little space and resources. If you suspect territoriality or dominance to be driving your puffy pigs, make sure they have enough space per pig and there are enough bowls and hay areas to go around.

Typically, a single guinea pig needs around seven and a half square feet, a pair needs at least ten and a half, a trio will need thirteen, etc., but bigger is always better!

Larger spaces allow for more places to hide for “me time,” more areas to run and play with or without one another, and more areas to place individual feeding bowls/hay feeders to make sure no one is feeling bullied out of their meal.

If you do not think this is what is driving your piggie’s behavior, perhaps your house is a little too chilly. Is It Cold in Here?

Guinea pigs hail from across South America—from deep forests to high mountaintops—and are therefore quite good at adapting to different environments. However, they are more well-suited to warm, humid climates than cold ones.

Guinea pigs are burrowing animals, so they spend a great deal of time underground in cozy dens with plenty of natural bedding and fur to snuggle into during the colder months. Conversely, living underground also helps shield them from the harsh temperatures of summer as well.

In the wild, guinea pigs rely on the temperate climate and their ability to gather and use environmental materials as their natural thermostat. They have a limited ability to regulate their own body heat, relying on their fur, ears, and shivering to stay warm.

Another method guinea pigs sometimes use to warm up if they are feeling too chilly is piloerection, or what we might call “puffing up” their fur. Many mammals, from meerkats to horses to primates (including us—goosebumps, anyone?) use piloerection to regulate body temperature.

If you notice that your piggies regularly puff up during mealtimes, or anytime, they are in a particular space, check your thermostat because they could be cold. The ideal temperature for your furry friends should be between 65- and 75-degrees Fahrenheit.

This involves the area in which they primarily reside, including their dining areas, as well as any area they are outside their enclosure for floor time/playtime, bath time, etc. If you live in a particularly cold region or have a housemate who just loves being chilly, make sure the room your guinea pigs call home is at least 65 degrees Fahrenheit.

If your piggies are exposed to cold temperatures for only a short period of time, they will be just fine, but prolonged exposure could lead to complications, so always stay vigilant of your pal’s living conditions.

Barring territorial displays or temperature drops, another common reason your guinea pigs may be puffing up their coats is that they are not feeling well. I Need a Doctor

As hardy as our little pals typically are, they are still susceptible to various ailments for which we must be watchful. Being so small, simple illnesses we humans would not normally fear like respiratory infections, to which guinea pigs are quite prone, could prove fatal if not treated in a timely fashion.

Guinea pigs are also particularly susceptible to a condition called GI stasis, in which food material in the digestive tract slows or stops moving altogether, causing pain, bloating, and blockages. Additionally, a surprising condition people may not know guinea pigs suffer from is scurvy.

Guinea pigs cannot produce or store their own vitamin C, so they must always have it available in their diet, lest they fall ill with the potentially fatal condition.

In addition to these sometimes-alarming ailments, guinea pigs are also prone to parasitic infection and diarrhea. In guinea pigs, a common signal for any one of these conditions, and many others, can be puffing up their fur.

Your piggies could be puffing up because they are not well, especially if the living space they share is not large enough for all of them. Too-small living spaces can be perfect vectors for infection if they are not cleaned often or well enough. To determine if your pals are indeed under the weather, look for some of these other non-specific signs and symptoms:

Knowing the various illnesses your guinea pigs could be suffering from, it is best to be familiar with these non-specific symptoms so you can schedule an appointment with your veterinarian right away, who will narrow down a diagnosis and prescribe treatment as needed.

Be watchful for any symptom, as even an ounce or two of weight loss could signal something is wrong. Fortunately, most conditions you may run across with your piggie are easily treatable by a vet, so you can go back to admiring your furry friends’ quirks in no time. Guinea pigs are prey animals, which means that in the wild they are on the menu for quite a few predators such as wild cats, coyotes, owls, and even snakes. Because of this, guinea pigs evolved over time to be wary of almost everything.

Their keen senses help them stay alert at almost all times—especially when they are out of their burrows collecting food or searching for mates. However, there are times when guinea pigs are vulnerable to predators no matter how cautious they are, such as while mating, sleeping, and of course, eating.

If your guinea pigs tend to puff out during mealtimes but do not display any other signs of dominance or illness, they might be acting on their prey animal instincts. Given that mealtimes are vulnerable times for guinea pigs, they may be puffing up to make themselves look bigger and less appealing to predators.

Of course, to you, there are no predators to fear in your home. However, to a little piggie, any number of things could be prompting this fear. From other pets like cats and dogs, no matter how friendly, to loud children, unfamiliar guests, or even scents they are picking up from outside your home.

If your pals are not displaying any other signs of stress or fear, like hunching up, circling, or bar-chewing, this behavior is not necessarily a cause for worry. In fact, your furry friends may not even realize they are doing it, it simply comes naturally!

If your guinea pigs puff up while they eat, they could be displaying signs of territoriality or dominance to each other. This behavior is not a cause for worry by itself, as it is quite normal, but be on the lookout for escalatory actions just in case. Additionally, your piggie pals may be too chilly.

Make sure your thermostat stays above 65-degrees Fahrenheit for your companions’ wellbeing. Further, your guinea pigs may be puffing up because they are feeling ill, so be watchful for signs and symptoms of illness or discomfort and call your vet if you suspect a medical condition.

Finally, your guinea pigs are tiny prey animals who know that mealtimes can make them vulnerable, so they could be trying to make themselves less appealing to nearby predators, even if that “predator” is your lazy housecat.

Make sure they are safe and secure and not displaying any signs of stress, and this behavior should not be cause for concern. In any case, as long as you are vigilant about the wellbeing of your pals, this puffed-up behavior is nothing to fear, so enjoy the company of your precocious pigs!