Hamster behavior can be baffling at best, and we all want to know what’s normal and what could indicate that a hamster is unhappy or unwell. Subtle behaviors or changes in activity can tell you a lot about how your hamster is feeling. One commonly seen behavior in hamsters is freezing and/or staring into space.

So, why is my hamster staring into space? Firstly, your hamster may be listening to or smelling something that catches its interest or frightens it. It could also be dozing. If the staring is accompanied by other symptoms, it could also be old, sick, or in pain.

In this article, we’ll discuss how a hamster’s poor eyesight factors into the way it stares into space and briefly explore ways in which its other senses compensate. Then we’ll take a look at how you can tell if your staring hamster is sleepy and why this can sometimes be a good thing. Finally, we’ll include an overview of accompanying symptoms that may indicate that your hamster is elderly or ill.

Hamsters are born completely blind, and even in adulthood their eyesight is very poor. In their natural wild state, they live in underground burrows, venturing out mostly at dusk and dawn or during the night.

They can see best in dim light, when their vision reaches a few inches in front of them and to each side. In bright light they are nearly blind. This poor eyesight can lead to your hamster staring vaguely into space when it seems there are plenty of things it could be looking at. It’s also why it may appear as if your hamster never looks directly at you. 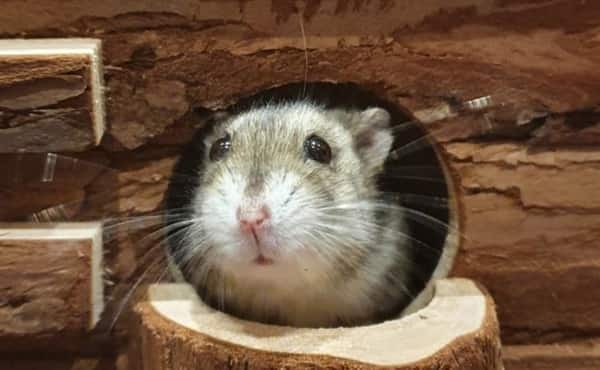 Compensation With Other Senses

If it wasn’t for the staring, the fact that hamsters rarely look right at you, and well– a propensity to walk off the edge of tables, you may never know that a hamster’s eyesight was so poor.

This is because several of their other senses more than make up for a hamster’s lack of sight by being very sensitive. So, another reason your hamster may stare off into space is because it is focused on taking in information through its ears and nose.

A hamster that is sitting alertly twitching its ears or whiskers or moving its head back and forth while it stares into space has probably heard, smelled, or vaguely caught sight of something that it feels it should give its full attention to.

It may have sensed you walking by, heard the sound of a food bag being crinkled, caught a whiff of a snack, or been startled by a loud noise. Your hamster may look like its zoned out when it’s actually paying very close attention.

You may notice that your hamster frequently stops in the middle of some other activity to sit or stand on its hind legs and stare at nothing in particular. It may seem especially odd if nothing noticeable has happened to attract your hamster’s attention. However, this is perfectly normal.

Hamsters are tiny, vulnerable animals that are often preyed upon in their wild environment. Even though your hamster may be perfectly safe in its cage in your home, its instinct is still to pay close attention to its surroundings and keep an ear out for danger.

This is why your hamster may stop in the middle of running in its wheel, scrambling around, or eating to stare into space, listening closely for any surrounding noises and sniffing the air for a scent of danger.

Hamsters tend to be easily frightened by unexpected movements or loud noises. A sudden gesture or sharp sound will put your hamster on high alert, causing it to dash for safety or freeze and apparently stare into space.

Again, this behavior is connected to their poor eyesight and alert instincts. Your hamster may not be able to tell that you are the one approaching its cage or that the dark object suddenly hovering over its head is your hand.

Its instincts warn that it could be something that wants to eat it and that the best way to remain unnoticed is to hide or hold perfectly still and blend into its surroundings. How to Tell if Your Hamster is Frightened

So how can you tell if your apparently spaced-out hamster is curiously checking out its surroundings or actually frightened? A curious hamster will often sit or stand up slightly on its hind legs, sniffing the air, looking around, and twitching its ears. A frightened hamster is more likely to stay close to the ground, flattening itself until its eyes seem to bulge.

What to Do When Your Hamster Freezes

If you notice your hamster freezing and staring into space, just talk quietly to it, assuring it that nothing scary is going on and that it’s perfectly safe. If you have frightened it by moving too quickly or reaching for it suddenly, slow down and give it a moment to calm down and assess its surroundings.

You can avoid scaring your hamster in the first place by approaching slowly. Try to avoid bright lighting so your hamster can see a little of what is going on. When you put your hand in the cage, don’t bring it down right on top of your hamster. Instead, slowly reach down in front of it or to one side so the hamster can see you coming.

Hamsters also sometimes stare into space when they’re tired. A hamster that has just woken up will need a few minutes to eat, drink, and groom itself. In the midst of these activities, you may notice that it periodically stops and just stares at nothing for a second.

Have you ever done this when you’re getting up after a deep sleep? Hamsters do it for a similar reason. They’re just not really morning people.

Although a hamster will not appreciate being picked up just after waking up, you may find that a content hamster that is about ready for bed is pretty happy to be held, and this can be a great time to spend a few minutes playing with it.

A hamster that is curious about what you are doing will often put one paw up on the side of the cage and stare into space as it listens to the sounds of your activity. This can also be a good time to get your hamster out for a short play session.

A hamster that is getting up there in years may be sleepier and stop more often in the middle of what it’s doing to rest. It’s best to check with your vet before determining that this lethargy is simply old age, as it can also be a sign of illness. Other symptoms of old age include the following.

A hamster that is ill or in pain also may appear lethargic and withdrawn. Your hamster may be ill if it sits hunched in one place, staring into space but seeming uninterested in its surroundings. Staring related to illness looks very different than the alert staring of a healthy hamster, and it may be accompanied by the following symptoms.

To sum up, staring is a perfectly natural behavior in hamsters. Because of their poor eyesight, they’re usually not actually looking at anything. Instead, they’re focusing on what they hear, smell, and feel around them. A curious hamster may pause for several seconds up to a couple of minutes staring into space as it deciphers the sounds and scents around it.

A hamster that freezes tensely or even flattens itself against the ground may be more frightened than curious. The best thing to do in this case is just pause or slow down and speak softly until the hamster realizes it is not in danger. You’ll be able to tell that your hamster has relaxed a bit when it starts moving again, perhaps sniffing or turning its head to listen more closely.

Occasionally, staring can be the result of tiredness, age, or even illness. Tiredness is not a problem as long as your hamster is getting adequate, uninterrupted sleep for 6 to 8 hours a day. In fact, a hamster that is getting ready to go to bed may be more interested in being pet and held than when it was busy and wide awake.

In the case of advanced age, pain, or illness, other symptoms will usually be noticeable. If in doubt, it’s always best to check with your veterinarian.